Clear sky with some clouds. In the afternoon east northeasterly winds moderate by places ; decreasing later.

Clear sky with some clouds. In the afternoon east northeasterly winds moderate by places ; decreasing later.

WHO IS SIMON BECK ?

Simon is the first and most well-known ‘snow artist’. An Oxford graduate, he quickly abandoned his initial career as an engineer to become a cartographer.

His obsession with directions, his passion for snow and his love of the outdoors and physical activity pushed him after a day skiing in December 2004, to draw a star on a frozen-over lake in front of his house. The next day he looked at it from a nearby chairlift and was amazed at the results. After the next snowfall he decided to take on a more complicated design and Snow Art was born!

He drew a lot during his childhood. Over time, his geometric shapes, inspired in particular by the snowflake of Koch, have become more and more complex. His large designs measure from 1 to 4 hectares (the size of between 2 and 8 football pitches), take around 12 hours and 20-30km of walking in the snow to complete, and are a real artistic performance considering the discipline required to create these huge artworks in the mountain environment. HIS FAVOURITE AREAS IN LES ARCS

Simon Beck takes 90 steps a minute, which makes around 65 000 steps to complete a work of snow art.

Every winter, he produces 4 or 5 artworks in the les Arcs ski area.

At 2000m, with his headphones in and his design in his hands, it’s thanks to classical music that Simon can keep his calm, his energy and his concentration to create his huge drawings.

To mark the anniversary of 50 years of les Arcs, Simon Beck has created a full-sized symbol of the resort: la Coupole. It took our English artist 4h of walking and 18 000 steps to complete this huge masterpiece on the lac Marlou. 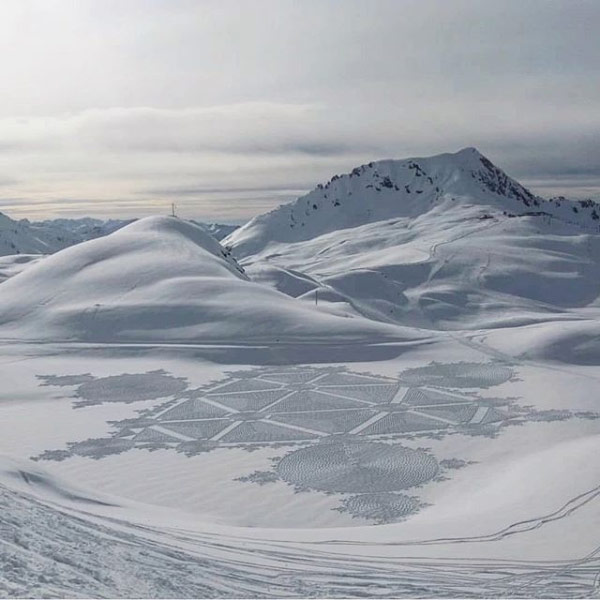